“I’m going to Dracula’s Castle! Wanna come with me?” 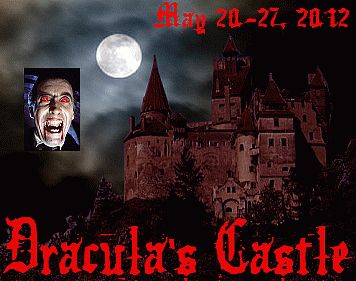 Meet with our representative at the Bucharest International Airport and transfer to the hotel.

Depending of your arrival flight start a city tour of Bucharest with the main points of interest like: Government Palace, House of Free Press, Royal Palace, Revolution Square, Parliament House (only outside visit) 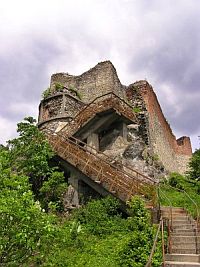 After breakfast start your journey on the trail of Vlad the Impaler (Dracula) with a visit at his true castle. We’ll go to Curtea de Arges, the former second capital of Wallachia. Close by is the Poienari Castle. Standing on a cliff but now in ruins this is known as the real castle of Dracula (Vlad Tepes). To get to the top you must climb up its 1400 steps (takes approx. 1 hour). Once you arrive to the top of the Citadel you will find that the citadel is surprisingly small, one third has collapsed down the mountainside in 1888. Entering through a narrow wooden bridge, you come across the crumbling remains of two towers within; the prism shaped one was Vlad's ( Dracula's) residential quarters, from here, according to the legend , The Impaler's wife flung herself out from the window, declaring that better this way than be captured by the Turks, who were besieging the castle. Legend has it that Vlad himself escaped over the mountains on horseback.

End the day in Sibiu.

Breakfast. Start in the morning with a visit of the Old District. Sibiu is one of the most important fortified towns in Transylvania. The city is reminiscent of old European cities such as Nuremburg and it was founded in 1190 and grew to be the chief city of the Transylvanian Saxons. This amazing town, with the "Old Town" (The Big Square, the Small Square, the Ursuline Church, The Franciscan Church, The staircase Tower, the Tanners Tower, the Lier’s Bridge , the House of the Butcher’s Guild and last but not least with the amazing Bruckenthal Museum) is a gorgeous place to see.

Then go on the way to Hunedoara and visit the Hunyad’s Castle. The most representative castle in this part of Transylvania was built in 14th century and became famous as a property of Iancu of Hunedoara, the great ruller and fighter against the Ottoman Empire at that time. Built in the 14th century, on the place of an old fortification, on a rock below which flows the small river. The castle is a large building, with tall and diversely coloured roofs, towers, windows and balconies adorned with carvings in stone. Optional: private visit during the night with the possibility to stay a few hours or entire night. 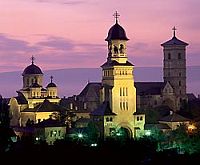 Depart from Hunedoara and go to Alba Iulia. The modern city is located near the site of the important Dacian political, economic and social centre named Apulon (believed by many archaeologists to be the Dacian fortifications on top of Piatra Craivii). In the roman period the city was known as Apullum. In 1918, tens of thousands of Romanians gathered in Alba Iulia on December 1, now commemorated as the National Day of Romania, to hear the proclamation of the union of Transylvania with the Kindom of Romania. In 1922, Ferdinand of Romania was symbolically crowned King of Romania in Alba Iulia in an act which mirrored the achievement of Michael the Brave.

Visit the old citadel, The Reunion Cathedral, The Reunion Hall and Museum, The Catholic Cathedral (who host the grave of Iancu de Hunedoara – the famous ruler of Transylvania.

End the day at Sighisoara .

Overnight in the Old Citadel at Sighisoara Hotel***. (the locals say it to be a haunted place with strange things happening during the night).

***This Hotel was built in 1520 and was a former Bishops house. It is where an annual Halloween party is held; and every staff member from the hotel, as well as several of our past tour clients have encountered a ghost there they have called Hansi **** 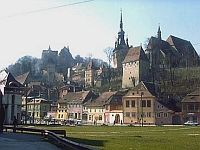 Explore the old area as Sighisoara and surroundings.

Visit the citadel of Sighisoara, one of the most preserved medieval city from Europe. Situated in Mures County, on the valley of the Tarnava Mare river, Sighisoara (former Dacian settlement and also called “the pearl of Transylvania”) was founded by the German immigrants in the second half of the 12th century and it was turned into a city in 1407. Its medieval aspect may be found both in the centre of the city and inside the Fortress of Sighisoara. In this area, houses are built very close to one another, giving a sense of “crowdedness” (in order to occupy the least space possible). Then visit Biertan fortified church (include in Unesco’s Heritages List), a fortified medieval church, one of the biggest from Transylvania with three defensive inner walls. Find more about the saxon (german) fortified churches. Return to Sighisoara. Afternoon at your leisure.

Than go to a route who cross a region with important saxon influence. You can admire the arhitecture of saxon’s villages, the fortresses from Rupea, Saschiz and Rotbav. The next stop will be at Prejmer. Visit Prejmer Fortified Church, one of the best preserved of its kind in Eastern Europe. The church is modeled after churches of Jerusalem, as well as built in the style of Late Gothic churches from the Rhineland. End the day in Brasov with a visit in the Old City Center. Main atractions are: Black Church.- a major symbol of Braşov, and a museum open to visitors of the city center, Weaver’s Bastion, Black and White Towers, Ecaterina’s Gate, Concil Square.

Accomodation at Casa Wagner Hotel ***, located in the heart of the Old District.. Once again a very old building ( 1477)

Breakfast. Depart to Sinaia and visit the Peles Castle, former summer residence of the kings of Romania, the Peles Castle is 44 kilometres far from Brasov, in Sinaia, a well-known mountain resort as well. Nowadays the Castle is one of the most important museums in Transylvania where one can admire furniture and ornamental objects, carpets, tapestry, sculptures, paintings, collections of weapons from the 15th up to the19th centuries.

Continue our visit at Bran with it’s famous Bran Castle. Also called Dracula`s Castle, it is situated not far from Brasov (25 kilometres) at the entrance in the Bran - Rucar passage. The castle got its fame from Dracula`s legend written in 1897 by Bram Stoker and later on made into a film by Francis Ford Coppola.. The first documents about the Bran Castle appeared in 1377. Along the history, the Castle had a strategic mission being the border between Transylvania and Wallachia. First it was under the rule of the King of Hungary Sigismund of Luxemburg, of the Romanian voievodes Mircea cel Batran and Vlad Tepes and later on it came under the jurisdiction of the City of Brasov

Next stop at Rasnov and visit the old citadel. Built in 1331, the Fortress had a defence role and it was a shelter for the inhabitants of Rasnov in case of enemy attacks. In the middle of the courtyard there is a well 146 metres deep and the ruins of an 11th - 12th century - Orthodox church were discovered here.

Nowadays the Fortress houses an interesting museum
Optional: private visit during the night at Bran Castle and/or Rasnov Fortress Back to Brasov. Accomodation at Casa Wagner Hotel *** or similar.

To reserve your space, and inquire about payment plans, immediately contact: