Mission Goal: We work to provide a free, public domain database of how paranormal phenomena can be hoaxed, useful for investigators evaluating the legitimacy of paranormal reports. Joshua P. Warren is our Founder and Director.

Busted by the HRC: The Irish Triangle Hoax 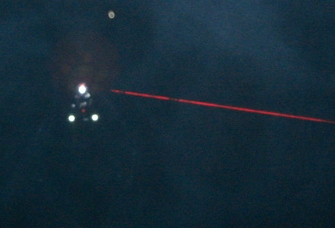 Late summer/early fall of 2008, reports started spreading across the internet about a triangular UFO witnessed in Ireland by notable figures such as a pilot and local politician. Many websites claimed it was captured at "10:35pm on August 3, near Dunboyne," and "was played and replayed to over 70 delegates who attended the fifth Irish International UFO Conference."

One expert is quoted as saying "There is no footage like this in the world. It is the most amazing and spectacular I have ever seen." Other experts were quoted as calling it "definitive proof" of recent Irish UFO activity, and "incontrovertible evidence" of an unearthly technology.

HRC's Mobius soon realized the description of the craft sounded very similar to a UFO built by Jeff Wilson at the 2007 UFO Experience, an annual contest produced by Joshua P. Warren to study fake UFOs in order to rule them out in imaging analysis. Multi-year champion Jeff Wilson contacted Warren to confirm footage of his craft was being used to support these bogus stories. No one knows who created the detailed story that gave life to this hoax, but it's certainly evidence of how effective UFO-builders like Jeff Wilson are, and how the public can easily be fooled. We believe this type of case raises the bar for those who analyze UFO footage.

Here are links to some of the fake reports:

http://www.abovetopsecret.com/forum/thread398748/pg1 Here's a good page about the case:

And complete details regarding Jeff Wilson's 2007 craft, and others like it that have competed in the UFO Experience, can be found at: www.UFOcontest.com