How YOU Can See the Paranormal Quickly by Using Tibetan IMOs

Let me tell you about a simple experiment I conducted that may boggle your mind . . . 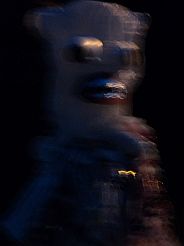 There are many types of ghostly manifestations. For example:

ENTITIES are ghosts that seem aware and interactive, literally like conscious spirits of those who have passed.

IMPRINTS are ghosts that seem non-interactive and redundant, like dramatic impressions somehow recorded in the environment that replay themselves over and over again.

But have you ever heard of a tulpa?

A TULPA is a thought-form, created by the focused intent of a person, or persons, which becomes so psychically impressed on the environment that others can actually see it. I'll give you a couple examples.

The "Philip Experiment" of the 1970s involved a number of Canadian researchers who wondered if a spirit could be created by human thought. They imagined a fictional character named "Philip," a warrior who lived in the middle ages. They sketched a detailed photo of him and developed a complete profile of his history, life and character (his wife's name, favorite food, experiences, etc) and thereafter spoke about him as if he were real. If there were a strange sound in a building, one might say "Oh--there's Philip again!" After months of this, Philip began to gradually materialize. And eventually, he fully manifested. Only then did they realize that creating an ass-kicking medieval warrior might have been a bad idea, since he began to abuse them!

A similar scenario surrounds Walter Gibson, a prolific author of the 1930s, who cranked out hundreds of novels featuring The Shadow character at an incredible rate--often two or more per month--for years. Decades after, residents of his Greenwich Village home claimed the place was haunted by his fictional characters. One might see The Shadow sweeping down a hallway, or a villain dash through a corridor.

This phenomenon of living, conscious humans creating apparitions through mental focus is what the Tibetans have long called tulpas. The extent to which these tulpas are actually alive and free, versus trapped in the initial mold which created them, is a blurry and complex subject. No one knows for sure. However, their existence might explain why strange creatures like bigfoot are clearly observed, but are fleeting visions, obviously not part of the normal, biological chain of creatures on this planet. In other words, if I buy a piece of property and say there is a bigfoot living there, after enough years, people will actually begin to see him. But GOOD LUCK capturing him! He would be a psychic impression, an extension and projection of the mental picture, somehow externalized and burned into the conscious-sensitive medium of the environment.

In 2010, I was hired by Warner Brothers to be a Technical Consultant on their horror movie The Apparition. The film was based on the idea of tulpa creation in a makeshift lab by inexperienced college students. While working on the production, my team and I employed some advanced techniques to create a tulpa by utilizing a vast plethora of gear to enhance human brain waves. You can see the details by watching the extras on the Blu-ray version of The Apparition. As it turns out, we were successful in manufacturing a dark, frightening specter that began to materialize days after our experiment ended. But that success made me wonder further about creating them in a more simple, organic way. After all, if tulpas are out there every day, their production does not require some specialized technical setup. This led me to create the experiment that is the crux of this article, one I conducted on Saturday, December 7, 2013, at my Asheville Mystery Museum in Asheville, North Carolina. 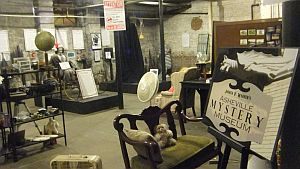 As part of a weekend workshop, I had 10 people, whom I shall now call "subjects." The goal was to see if 9 of the subjects could quickly create a simple tulpa that the 10th could observe. Here is how the experiment was set up:

One person, the "receiver" was placed in secure isolation. I then walked down a hall to a separate room, the "tulpa room," that was set aside strictly for the purpose of containing our tulpa. In that room, I placed an object on the table. Then, one by one, or sometimes as a couple, the 9 other subjects were invited to enter that room and fixate on the object for a few minutes, trying to burn its impression into the psychic environment. After each subject was done, I removed the object from the room, and retrieved the receiver. The receiver was taken into the tulpa room and told only that an object had been placed on the table. Then the receiver was left there to contemplate until he or she was ready to come and tell us what he or she perceived the object to have been. Ideally, the receiver would "see" the tulpa of the object created by the nine other subjects.

For the very first round, I wanted to keep things as simple as possible. Instead of placing some elaborate object, I only wanted to see if the receiver could detect the coloring of the tulpa. Therefore my first object was just a sheet of yellow construction paper. 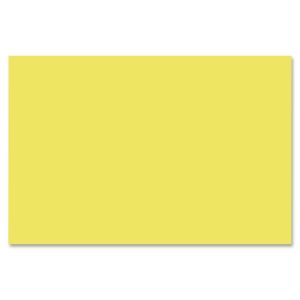 Once I placed the paper on the table, the 9 other subjects did not know what the object was until his or her turn to walk into the tulpa room and meditate on the item.

Once all were done, I guided the first receiver, a woman named Donna, into the tulpa room. She came back a few minutes later, ready to share her vision of the object with the group. All I was hoping for was her perception of the color "yellow." Instead, she surprised me. She said she had seen a brownish or yellowish "box." This was quite startling, since it went one great step beyond color alone. I knew it was a flat, 2-dimensional sheet of paper. But she was told it was an "object." It seemed an obvious hit that she had not only seen a general color scheme, but a rectangular shape she assumed must have been a box. Impressed, I decided to up the ante a bit, and require a physical form description.

For round two, the receiver was a man named Chris. Once he was placed in isolation, the object I chose was a roll of clear shipping tape with a red, plastic dispenser tip. I placed it in the tulpa room on its side. It was obvious that the only real color was red, but being a roll of tape, I expected some kind of circular impression might be apparent in the tulpa. As before, the 9 subjects entered the room and fixated. Once done, Chris was brought from isolation and put in the tulpa room. He was there less than a minute, before he felt sure what he had seen.

Chris told the group he had clearly seen a "red triangle." At first, this was both exciting and disappointing. He had nailed the color, but he had missed the circular shape of the roll. Then, however, I pulled the roll of tape from my bag and the light bulb went off. The roll of clear tape is virtually invisible, yet, lying on its side, the plastic dispenser is a vivid red triangle! The realization hit our entire group at once, and we actually, spontaneously applauded the feat in awe!

These results are especially important since they tell us something crucial about tulpas. If these results were the product of another phenomenon, like telepathy, Donna would have seen the piece of paper the same way we did. She would have said, "I see a flat rectangle." But she interpreted it as a "box" because she was only seeing the shadowy tulpa, and when I told her the item was an object, she naturally assumed it would be something three-dimensional.

If it were telepathy, Chris would have said it was "a roll of tape," because that's how we subjects saw it. Instead, he described the "red triangle," since that was the predominant aspect of the shadowy tulpa image we burned into the environmental medium. Chris and Donna saw the objects, but they saw them differently than those of us who knew what they were. Chris and Donna saw the tulpas we had created based on those objects.

But wait--there's one thing I neglected to tell you . . .

Maybe even the key to you seeing tulpas, and a LOT more . . .

BEFORE each one of the subjects fixated on the item . . . BEFORE Chris and Donna fixated on the tulpa . . . each and every person spent a few minutes entering the theta brain state by using Tibetan IMOs.

The human brain produces a great deal of electricity--perhaps as much as 10 watts. A relatively small number of brains wired together could power a light bulb!

The electricity that comes from your wall outlet oscillates, pulsates, or switches 60 times per second. That means the current flows at 60 hertz (Hz). Your brain current also switches at various Hz. By measuring these differing hertz, we can divide normal brain activity into four basic states: Delta, Theta, Alpha, and Beta.

When the brain produces 15-40 Hz, it's in the most active state, Beta. One engaged in conversation, reacting quickly and efficiently, is in this state.

If one takes a break, perhaps using the restroom, and is reflecting alone, the current lowers to the Alpha state, 9-14 Hz.

One in meditation or deep, focused thought (such as working on a math problem) is usually in the Theta state, 5-8 Hz.

At 1.5-4 Hz, the lowest frequency, Delta, is usually only reached during sleep.

Monks, seers, and those who enter "psychic states," like remote viewers and precognitives, are usually in a Theta state. However, it can be difficult for some to switch into this state at will. But there is one simple method that can be used to make the brain automatically enter this state. It's generally known as the Ganzfeld technique. 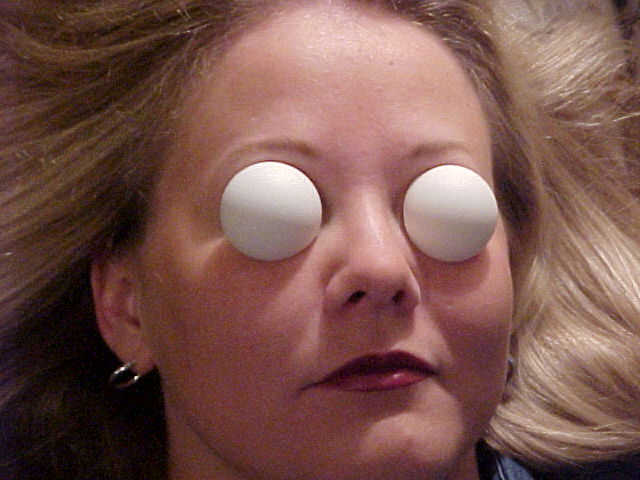 By placing a small, translucent dome over each eye, and staring at a light source, the mini-domes take up the entire range of vision, including peripheries. This leaves no edges or contrasts on which the eyes can focus. Once the brain determines there is nothing to distract the eyes, it automatically shifts into a Theta state within a few minutes. Since the light still stimulates the optic nerve, it is better than simply using complete darkness. Not only does this produce a profound sense of peace and stress-reduction, but it also opens one's "third eye" to perceive psychic phenomena.

After lots of study with this technique, I realized the Tibetans had also known this technique can be employed. Therefore, I had Tibetan Instant Meditation Orbs, otherwise known as Tibetan IMOs, created specifically for ESP and psychic experiments.

The domes fit comfortably over the eyes, and provide the optimum experience, lowering your brain into the theta state and allowing you to not only relax and de-stress, but also perceive tulpas and other spiritual phenomena.

I implore those of you reading this article to reproduce the tulpa experiment I have described for yourself, and perhaps even expand it to a much greater scale. But regardless of whether you are a group experimenter or just someone who wants to experience the "other side," a set of proper Tibetan IMOs is an absolute must.

The experiment I have described so impressed me that I will be digging much deeper into this technique and its implications. And I hope you will keep me informed of the experiments you produce, and experiences you have, taking this knowledge, and these tools, to the next level.

Don't take my word for it--see for yourself! 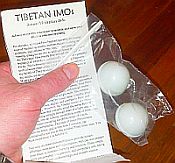 Purchase a set of professional Tibetan IMOs & Instructions
for $24.95 including shipping & handling!