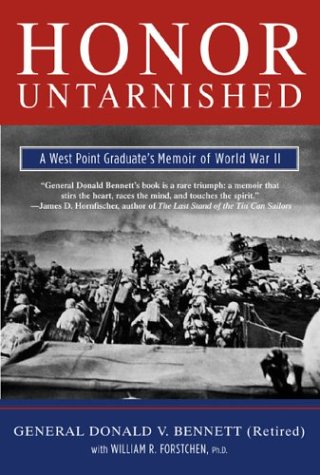 What the bestsellers Flags of Our Fathers was to Iwo Jima and Duty to the mission of the Enola Gay, Honor Untarnished is to the World War II tour of duty of young graduate of a West Point. Whether it was fighting Rommel's fierce Afrika Korps hitting the beaches of Normandy on D Day, surviving the Battle of the Bulge, or just being in the next room during the infamous "slapping incident" of Blood-n-Guts General George Patton, Donald Bennett experienced the fiery crucible of World War II and survived to tell about it. As a recent graduate of West Point, First Lieutenant Bennett was given the charge of training inexperienced and scared recruits, and leading them into battle against the Axis forces. From orientation at Fort Sill, Oklahoma through the fiercest battles of the war right up to the liberation of the death camps and our complicit confrontation with the Soviet Union over Eastern Europe, Don Bennett, not yet thirty, preserved the honor of the corps, and the liberty of the free world. Lindbergh, Patton, Bradley, and Eisenhower are just names in a history book to most-but to Don Bennett they were personal acquaintances. This is the story of D Day, the Bulge, and the rest of the war. It differs from many recent books on similar events ... because Don Bennett was actually there!