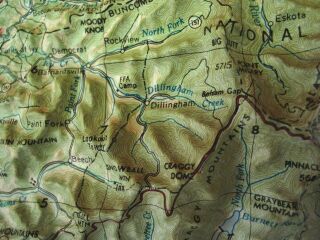 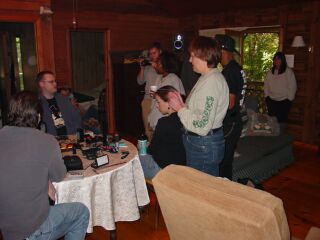 Graystone Cabins (some for rental, some sold as residences) is a true paranormal hot spot. There are reports of ghosts, bigfoot, UFOs (spheres of light in the woods), and little people roaming the mountain. This may not be surprising since these are the oldest mountains in the world, aligned horizontally with Brown Mountain (Brown Mountain Lights), the Devil's Tramping Ground, the Lost Colony, and Bermuda. The scenic estate is so active it has been featured on The Travel Channel. Historically, numerous deaths and murders occurred there, including lynchings in the early 1900s. There are ruins of an overgrown village, and cemetary, tucked away on the mountainside. The most famous ghost is Raymond, a black man murdered in the 1920s for flirting with the wife of a white friend named George. 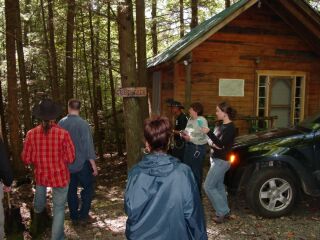 A few years ago, L.E.M.U.R. collected hair samples from a tree where a tall, dark, hairy hominid was seen drinking from a creek (at Creekside Cabin). More recently, previous residents of the Poplar cabin were shocked to find their pet goat had been torn in half during the middle of the night. The long, humanoid prints found at the site convinced them to sell the place. A BFRO report records a significant bigfoot sighting nearby in fall of 1986. For that report, click HERE.

This weekend, L.E.M.U.R. divided researchers into groups spread across the property, observing at various times of day. Here are highlights from what happened:

1. Sarah Harrison, of the Asheville Paranormal Society, took a photo of the woods at night. The developed image showed what looks similar to the eyes of a tall being glinting in the distance, along with a few orbs. 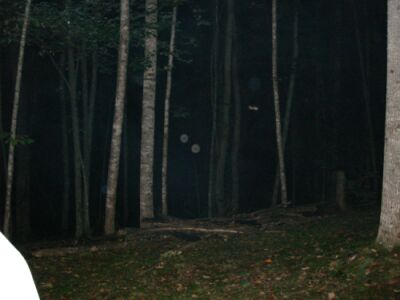 2. We found at least two indentations that may be prints. One of them, beside the Poplar Cabin (where the goat was devoured), was around 13 inches long, and had a humanoid shape. It was around one inch deep, though the resistant ground was mossy and spongy. We confirmed that nearly 400 pounds of pressure created no imprint at all. Therefore, if something pressed onto the ground to make this impression, it was extremely heavy. 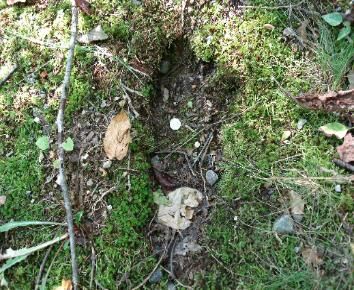 3. On Saturday night, several researchers, including Caleb Hanks and Chris McCollum, witnessed a bright sphere of white light in the woods. They were excited to photograph the anomaly. However, they were perplexed and disappointed to later find that particular image had vanished from the digital camera, though every other photo, taken before and after, was there. This seems like warp activity (see Warren's book How to Hunt Ghosts).

4. Guests experienced the following: physical touches and disembodied voices in cabins, knocking on doors when no one was around, misty forms moving around the large hill containing a gravesite, and other warp-like activity (such as extreme deja vu).

In addition to research, we socialized with new investigators and shared ideas regarding such remarkable phenomena. Graystone welcomes paranormal investigators and gives special deals to groups. For more information, see: www.Graystone-Cabins.com and contact Cindy Capps.

For other upcoming events you can attend, click HERE. 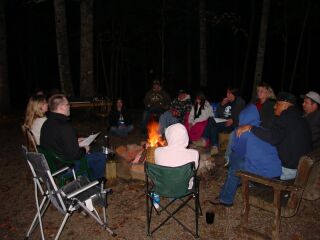 First 55 to purchase tickets are invited to a private party with Warren, Jim Marrs, and Nick Redfern

Regular updates & more events will be aired on: