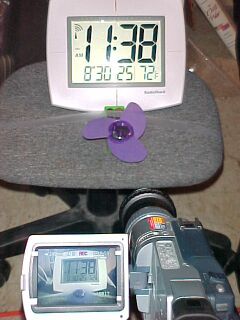 Do Batteries Run Down Faster at Haunted Places?

Most paranormal investigators have heard the anecdotal tales: batteries run down faster, and electronics malfunction more, at locations reputed to be haunted. In fact, L.E.M.U.R. has experienced this phenomenon on numerous occasions. There has always been speculation that paranormal energies somehow drain the power from batteries, or overload electrical circuits, causing the problems.

L.E.M.U.R. has especially experienced this activity at the Smith-McDowell House, the oldest standing structure in Asheville, North Carolina, built in 1840. It is also one of the most haunted places in Asheville, with stories of specters abounding, and mysterious electromagnetic/electrostatic fields moving throughout. On one occasion, during a group investigation open to the public, several people were videotaping in the basement. At once, each person's camera died simultaneously. Later, the cameras began to work again.

L.E.M.U.R. decided to see if we could document some aspect of the Smith-McDowell environment that does indeed drain batteries or cause circuits to malfunction. A very simple experiment was devised: Take a basic circuit, like a small motor running on batteries, allow it to run its course at a control location, then do the same in the mansion. Will there be a difference?

1. Motor: For this preliminary experiment, Warren chose to use a small fan that runs off two AA batteries. Using a fan is convenient, since the blades allow one to clearly see when the motor has stopped functioning.

2. Duracell AA batteries: For both the control and mansion test, brand new batteries were taken from the same pack, tested in each case with a volt meter to ensure they produced the same approx. amount of power (in this case around 1.612 volts each).

3. Clock: The fan was taped in place in front of an atomic clock, the timing device. Given minute variations in voltage, we decided to disregard seconds, rounding the time to minutes.

4. Camera: A video camera to tape the entire process. This would prevent the necessity for a live observer the entire time. Once it is noticed that the fan blade no longer moves, one can simply rewind the videotape, watching the fan blades, to see at what point the motor ceased. The clock visible in the background will allow you see exactly when the motor ceased compared to the start time. NOTE to other experimenters: If the camera can only tape for an hour and the motor is still running, simply be sure to check on the experiment at the first hour, then rewind the tape and continue if necessary.

We were surprised that the motor ran for the exact same amount of time in each case. This seems to demonstrate the consistency, and therefore accuracy, of this experimental setup. This result is extremely preliminary, as we plan to continue the experiment under different conditions (times of year, temperatures, etc.) and expand the number of locations included. But for now, based on this early data, here's what we can conclude:

There is nothing about the location, ever-present, that automatically drains batteries. Therefore, when such anomalous events occur, they are extremely random in nature, almost like an EM pulse that passes through at, for now, unpredictable times. This makes the phenomenon even more mysterious. It may also be that only more sensitive electronic devices are effected, as opposed to a motor or conventional batteries.

In order to build an effective database, not only do we plan to continue this experiment, but we hope others will also conduct this experiment at various locations. We are especially hoping L.E.M.U.R. Affiliates will do so, and plan to keep them, in particular, updated on progress. If we eventually find some places do, in fact, affect electrical devices inexplicably, it may be a key to eventually defining a haunted site.

Please discuss this topic and post results on our Discussion Board thread by clicking HERE.

First 55 to purchase tickets are invited to a private party with Warren, Jim Marrs, and Nick Redfern

Regular updates & more experiments will be aired on: