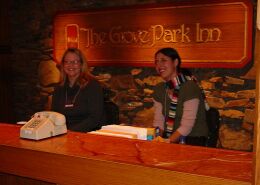 The Paranormal Conference was a tremendous success. There were lots of fascinating results, and here you can see a small portion of the anomalous photos captured by guests. Apparitions were seen, physical effects were experienced, and a plethora of ghostly activity occurred. We hope conference attendees will post their experiences on our NEW DISCUSSION BOARD, allowing the paranormal community to learn from these encounters. We also successfully used orgone technology to improve the weather conditions! The National Weather Service expected the event to be snowed out. But, alas, it was not.

From a research standpoint, One of the most outstanding revelations came from the program called "Extreme Martial Arts Demo: The Death Touch" with Master Tom Cameron. 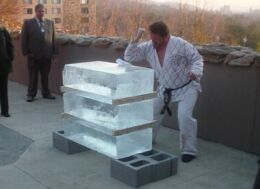 Cameron has been featured on "Ripley's Believe it Or Not" and "Coast to Coast AM" due to his extraordinary energy projections. At one point during the weekend, he was knocking people down without even touching them. And, when he expended the greatest amount of energy, L.E.M.U.R. researchers Joshua P. Warren and Robert McGhee were astounded by what they witnessed. Their EMF meter maxed out, showing that more than one milliGauss of energy was expended. Here's what that means:
The human body's strongest electromagnetic field is produced by the heart. The strength of this field is around 50,000 femo-Teslas (fT). The fields measured during Cameron's demonstration were in excess of 1 milliGauss (mG), more than 1000 times stronger than the field of the heart. In fact, 1 milliGauss was the maximum reading allowable on the device's setting (since L.E.M.U.R. guessed he could produce that much). That means he may have created far more than 1 milliGauss. And, perhaps most shocking of all, is that this field was measured from several feet away! It was not one surge, but multiple surges.

Based upon conventional knowledge, a human should not be able to project a field of even 1/10 of a milliGauss from several feet away. One of his students created 2/10 of a milliGauss: 2/10 of what L.E.M.U.R. measured coming from Cameron. Such results are truly spectacular, and show he is successful in training his students to enhance their energies well beyond the normal person.

Additionally, small fluctuations in the radio wave and microwave spectrum (measured with a Tri-Field Natural EM meter) were observed. The device that captured the 1 milliGauss surges (Gauss Master/Dr. Gauss) is calibrated at 50/60 hertz. This shows he produced a wide range of low frequencies. The actual size of the wavelengths would most likely vary from as tall as 20 feet high to a few inches. These are extremely large wavelengths as compared to those of visible light, UV, X-rays, and gamma rays. 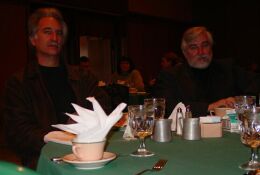 Supporting reports from attendees, it makes perfect sense that he was able to produce heat with these types of waves. The friction of these waves passing through molecules would create a substantial amount of heat energy. L.E.M.U.R. also thinks another presenter, Patrick Huyghe ("An Illustrated Guide to UFO Aliens"), was on the right track when he suggested Cameron might be manipulating zero-point energy, separating the molecules of matter before his hand passes through.

Using a small object that can be moved with 1 milliGauss of electromagnetism, Master Cameron should be able to produce a clearly-observable telekinetic effect on a consistent basis. This could revolutionize our current ideas about physics and biology. It is of the utmost importance.

L.E.M.U.R. plans to travel to Chicago and document Cameron's abilities under stringent laboratory conditions. This should yield major breakthroughs in mainstream science.

There are currently no plans for a conference next year. L.E.M.U.R. has decided to travel the world investigating the most outstanding paranormal sites around the globe. The great news is that you can come, too! For updates, please visit www.ParanormalExpeditions.com. Our next venture is a Paranormal Cruise into the Bermuda Triangle for this Halloween. We'll spend an entire day exploring Nassau in the Bahamas (where pirate ghosts abound). It's three nights, all meals included, for only $349 per person. As of this writing, nearly 60 people have signed up, and you can sign up now if space is still available. For all the details, visit www.ParanormalCruise.com. We hope to see you on our way to the Bahamas!