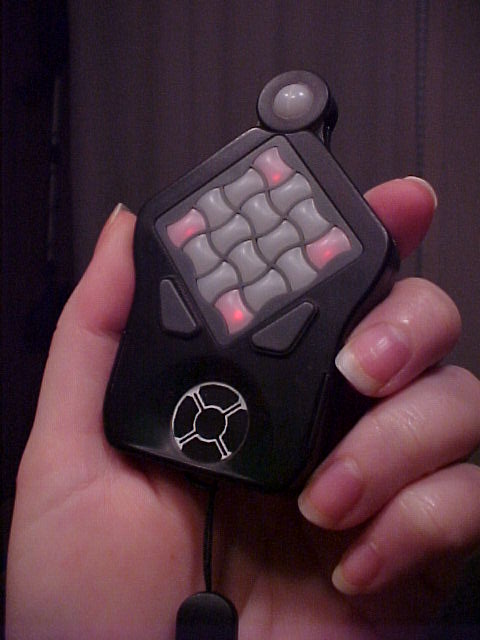 In early 2005, I heard about a new device called GhostRadar, manufactured by Solid Alliance in Japan. I read a press release regarding the unit on my radio show, Speaking of Strange. Basically, the release said this instrument reacts to "unusual magnetic waves, body heat and perspiration." However, the actual system of technology used is a secret. "This detects invisible phenomena and so the system is confidential," said company CEO Kunihiro Kawahara. "This is not a game. This a measuring device." Solid Alliance has specialized in strange USB memory storage devices, including units shaped like rubber ducks and sushi. Indeed, the GhostRadar was also intended as a USB memory storage device, with the GhostRader functions and the USB memory functions NOT related. The ghost detection functions seemed to be a novel way of selling the USB storage mechanism, with units capable of storing from 128-512 megabytes, and ranging in price from $119-$239 USD.

Given my credentials in paranormal investigation and media, I contacted Solid Alliance and offered to review their product for a free sample. They were very kind and promptly sent me a free model, save the $40 shipping cost I paid for FedEx. The black unit I received measures approx. 3.5" x 2.5", slightly smaller than my palm.

The only feedback on the GhostRadar comes from interpreting the pattern of red illumination on 16 plastic panels. Though the instructions are translated into English, the translation is not very clear. They illustrate eight examples of different light patterns and offer interpretations for each example in three basic categories: Influenced Space, Moving Characteristic, and Physical Effect.

1. Influenced Space: This is either defined as "Wide" or "Narrow." To the best of my understanding, this addresses whether or not the energy field is focused and strong (narrow) or spread out (wide).

2. Moving characteristic: Either defined as "Moving," "Still" or "???" I kid you not: their instructions actually have the "???" as a possible interpretation--not very scientific. I suppose this addresses whether or not the field is transient or stationary.

3. Physical Effect: Defined as "Negative," "Positive," "NO," or once again, the ol' "???" I think this addresses whether or not the field is "good" or "bad" for the people present, and I have no idea by what standard this could be judged. Nor do I know what the "NO" means, unless it's just another way of saying "negative." As you can see, it's a cluster of information that seems to provide no clear measurement of anything objective.

The GhostRadar has two buttons on the front and works in six different modes. Primarily, the button on the left is on/off and the one on the right changes modes. It also has an internal clock function (which supposedly contains lunar phase information) that must be set at midnight by pressing the right and left buttons simultaneously for about 10 seconds after turning the unit on. Be sure to do this, or the device doesn't seem to function according to plan.

Here are the following modes:

1. Normal Search Mode: Each of the display's four corners blink regularly. Then, once in a while, the rest of the display illuminates with one of the weird, moving patterns, and beeping increases during that period.

2. Magnetic Field Sensor Mode: The tiny, spherical, translucent sensor on the device reacts to magnetic fields. If you hold it up to the light, you can see a small, metallic apparatus inside that mechanically moves in relation to magnetism. It's quite an unusual mechanism.

4. Bio-feedback mode: There's a depression on the unit molded for a thumb. It has four panels and the display illuminates according to the conductivity of your thumb allowing current to pass from panel to panel. It's not very sensitive, and rarely illuminates unless you press on the panels or are sweaty.

5. Optical sensor: This detects light. If you hold it toward a lamp, nothing happens. If you put in the dark, the entire display lights up.

The unit beeps constantly, and has a small, violet LED on its back that blinks constantly, as well. It also has a handy neck strap. There is no writing (either letters or numbers) on the device related to any data feedback--only company information, mainly related to the unrelated USB function, on the back. After 15 minutes of use, it shuts off automatically. It's powered by a button battery (you can put in two at once for longer life).

For about a week, I have tested the GhostRadar's reaction to a wide range of electric, magnetic, electromagnetic, and electrostatic fields, including various combinations/frequencies/wavelengths, etc. Ultimately, the most useful mode is the Magnetic Field Sensor Mode, since it clearly reacts to magnetic fields, as intended, with the display's overall illumination increasing when exposed. But even that mode is not very sensitive and slow to react--in fact a compass needle will react more strongly, distinctly, and swiftly. Thus far, I have seen no consistent evidence of sensitivity to electrostatic fields, high energy EMF such as that produced by a plasma ball, or low energy, like the 50/60 hz oscillations from an AC outlet. Regardless, the system of interpreting data, based on the largely subjective process of reading the erratic patterns of lights, and making sense of the vague instructions, makes this device useless for any serious research. Plus, when they won't tell you exactly how it's supposed to work (i.e. to what energy patterns it's designed to be sensitive), you can't really define what's happening anyway. I will continue to use it in the field sometimes as an experimental tool since I may eventually notice something more outstanding, over a longer period of time, at diverse locations.

Though the manufacturer's CEO says "This is not a game. This a measuring device," he also calls it a "toy," and said "However, the actual setting of GhostRadar is not simple. It will not be affected directly by artificial magnetic or electric effect such caused by mobile phone or PC. So, in the sensing mode, sometimes there will not show a ghost pattern for so many hours, but other cases it happens often. Unfortunately, we are unable to disclose of the detail setting of all the parameters in GhostRadar, but we have some interesting reports from the users saying that their GhostRadar showed patterns in a spot they saw a ghost before."

Whatever the case, the GhostRadar is a nebulous product that is best suited for non-scientific thrill-seekers or aficionados of paranormal investigation equipment who want something weird for their collection. Regardless, based on the detection characteristics alone, I can't come close to justifying its price. In my opinion, without the USB function, it should be a novelty of $20 or less.

In the United States see: www.Dynamism.com

For the manufacturer's site in Japan: www.GhostRadar.jp