Do you think there would be any other types of visual results with the Tesla Purple Energy Shield, if a video security camera were to have been used in testing?
Does it matter? Probably not! But what does matter is if you have a security camera system to obtain photo's of your home or place of business whether your
on site or away! For more information on this type of technology, check out 123 Security CCTV Cameras. 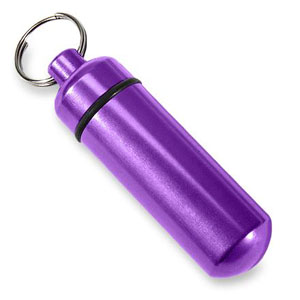 
In late 2005, I came across an ad for products offered by LifeTechnology.org. This company deals in small devices, such as pendants, that may alter subtle energy fields, especially those surrounding organisms. These subtle energy fields are mysterious, the type often called chi, orgone, or prana in a variety of disciplines. The mainstream sciences do not currently acknowledge the existence of these energy forms. Since the existence of such energies seems natural, my team and I have always been curious about means of measuring them objectively.

After inquiring about testing one of their products for scientific evidence of subtle energy influences, LifeTechnology.org sent me The Tesla Purple Energy Shield, a metal capsule about two inches long, usually retailing for $179.95, but currently available for the "special introductory price" of $89.95.

On that page, they say "Aside from delivering vast quantities of new life force energy to the human body (see Kirlian photos below), it brings illumination to the mind and tranquility to the soul. As we will explain, there is much, much more to this device than initially meets the eye!"

Kirlian photos are produced by running an electrical current through a subject while that subject is in direct contact with a photographic negative. So, in effect, it gives you a visual of how, and how much, electricity flows through the subject--or you could say it tests conductivity and related factors. For more info. on the Kirlian technique, see: http://shadowboxent.brinkster.net/lemurkirlian.html

The photos posted on their site show two Kirlian fingerprints: 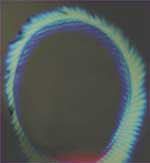 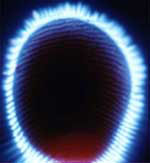 One taken while the pendant is worn shows a much stronger coronal discharge. This implies that wearing the pendant somehow boosts the body's ability to channel and conduct energy. This supposedly enhances psychic ability and a general sense of well being.

They say the device is based on technology developed by brilliant inventor Nikola Tesla, and claim "The Tesla Purple Energy Shield™ is an antenna for cosmic energy (tachyons) which act as a harmonizing field for the mind body and soul." I don't know what is contained in the purple metal container since that is apparently a trade secret. Cracking it open might ruin my ability to test it accurately.

After receiving the device and placing it around my neck, I didn't feel anything remarkable. However, two of my test subjects had extreme reactions. One felt completely energized, saying he could feel an almost electrical force beaming through his body, revitalizing him. The other subject had an overpowering sensation of negativity, and removed the device after 10 minutes or so. The instruction paper that came with the pendant reads "The Tesla Purple Energy Shield does have a very unusual effect on the human organism. If any signs of discomfort or anxiety are experienced while wearing The Tesla Purple Energy Shield, or if the transformational effects become unpleasant in any way, stop wearing The Tesla Purple Energy Shield immediately." LifeTechnology.org later told me We would like to point out that the negative effects associated with wearing the shield occur as a result of rapid detoxification and these symptoms normally abate with continued use. Your test subject who experienced the negative side effects would more than likely have experienced positive effects if the shield had been worn for a longer duration.

Even considering their experiences, and wearing the pendant many times over several months, I have never been able to feel anything particular, or notice any extraordinary phenomenon personally. I also tested the unit to see if there were any electromagnetic or electrostatic anomalies in its presence. There were none--and so whatever effect this pendant may or may not have, it is surely a passive one.

Since the subjective impressions varied so greatly, and there was nothing I could detect in the energy field around the device, there was only one test left. I reproduced the Kirlian test, taking eight photos. My test subject was a 33-year-old female, and when she wore the device, it was directly in contact with her flesh. Over a period of fifteen minutes we took 2 pics without her wearing the unit, 2 more with, 2 more without, and 2 more with. The only variable condition was whether or not the Tesla Purple Energy Shield was being worn, and each time I Kirlian-photographed the middle finger of her right hand. I fully expected to find no noteworthy change when the unit was being worn since there is no clear scientific reason for such variation. And yet, the results were certainly surprising. Here are those photos: 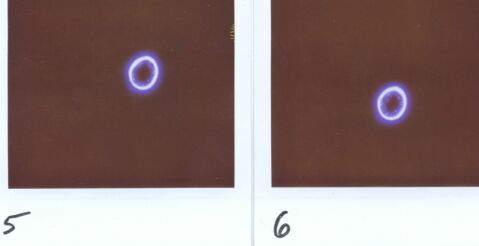 When the pendant was being worn, the electrical discharge seemed stronger, brighter, and thicker. I cannot explain why wearing a pendant should create these effects. LifeTechnology.org says we would also like to stress that the Kirlian analysis of the shield should take place when the subject has worn the shield for 24 hours or more. Measurement without the shield should be taken 72 hours before or after wearing the shield because subtle effects can be residual.

Altogether, I found the combination of test subjects' subjective impressions and my own Kirlian test to surprisingly confirm many of the claims made by LifeTechnology.org regarding the Tesla Purple Energy Shield. It is a mysterious device, and I intend to keep experimenting with it.